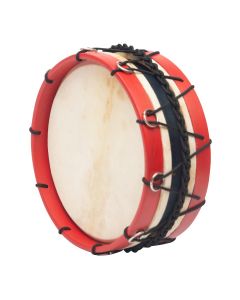 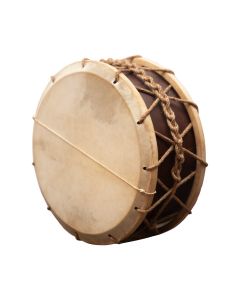 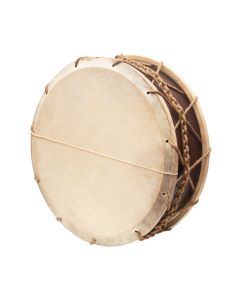 A Tabor Drum or Tambourine is a portable snare drum that is played with the help of a hand or using sticks or both. The Tabor word is derived from Latin word tambour that was used in the army for marching purposes to boost the morale of soldiers.

As far as construction is concerned, Tabor drum has a wooden shell shaped like a cylinder. It has two skin heads that is tightened by rope tension. It also contains a strap made of leather and an adjustable snare. The snare can be created with the help of a hemp or silk. The size of a tabor decides the sound and pitch of the instrument. For example, the larger the tambourine, the lower the pitch. The tabor is suspended by a strap from forearm.

The use of tabor is widespread all around the world for entertainment, spiritual, or military purpose. The snare size of a tabor is beaten with a stick or a naked hand. Morris Goldenberg was one of the most popular tabor players in the 20th century. Tabor does not need any complex notes or difficult playing; the instrument can be played by simply striking the snare in an easy pattern that can be repeated several times.

The history of tambourine dates back to the medieval era in Europe. The early tabors were only 11-12 inches in diameter. The 13th century tabors were 4 to 10 inch wide and the continued to evolve with time that changed in diameter and width. Tabor is still made from wood and was made for the outdoors. Tabor has always been played for dancing with regular beats. The historic documents also show that tabor was played with a horn that formed a tabor duo.

The players can play tabor solo conveniently. Or they can use two sticks instead of a hand or a single stick to strike the body of the drum. In the mid 17th century, the instrument continued to decline in Europe. However, in the 19th and 20th centuries, tabor is still used with a modern style.

Musikhaus Prince provides tabor styles that capture the imagination of savvy musicians and drum enthusiasts. On our online musical shop https://www.musikhausprince.de/, you can buy tabor drums to meet your style needs in the best prices and designs.

For example, a few tabor types we sell to Germany-wide customers are:

Each tabor drum comes with a drum head made specifically from the goat head. The playing surface varies around 9 inch. Each drum comes to you with drum sticks. You can also suspend it by a strap from the forearm. Tabor represents the classical and contemporary European culture; only Musikhaus Prince Berlin has the perfect sizes of Tabor to suit your desires.