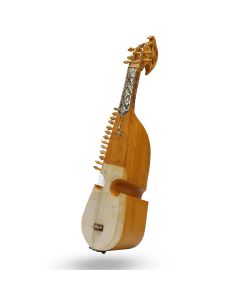 Rubab or Robab comes out of Urdu or Pashto language, is referred to as a musical instrument that is similar to a lute and emerged from an Asian country Afghanistan. The fact remains that till today, Rubab is the national musical instrument of Afghanistan. It has always been a favorite instrument of Bloch people in tribal areas of the West and Southeast Asia. The name Rubab is derived from Arabic word “rebab” that was played with the help of a bow in Central Asia. Nowadays, the instrument has evolved and being played by plucking strings.

There are many variants of Rubab that come in different sizes. For example, Rubab is found in large, medium, a small size.

The large rubab is also known as the “king size” rubab with 21 strings and 15 sympathetic strings.

Medium-sized rubab is the most popular instrument that comes with 19 strings and 13 sympathetic strings.

The small-sized rubab has only 5 sympathetic strings.

The stringed instrument has many components with a bowl shaped body. The body of the instrument is called badanah. The side is referred to as safah; the neck is called dashah; and the tailpiece is called seemgeer.

The body of rubab contains a head that covers a bowl-shaped body to serve as a sound chamber. The bridge is located on the skin of the instrument. The strings are all located on the bridge that remains tense and tight. The instrument primarily has three strings for producing a melody and most wooden material comes from a mulberry tree.

The history shows that Rubab was known as the “lion of musical instruments” in Afghanistan. It was a major part of their classical music. In some parts of the country, the instrument is also known as “Kabuli rebab”. It is a predecessor of Indian Sarod because sarod also had frets similar to it.

Many Rubab variants are also found in the modern world such as Pamiri Rubab in Tajikistan. The most prominent players of Rubab were Mohammed Omar (1905-1980) and Qais Esar from Afghanistan.

Buy Your Dream Rubab from US

Our most precious collection of Mulberry wood Rubab is available at https://www.musikhausprince.de/. The Rubab is popular in Berlin and other parts of Germany among many Asian people connected to their roots living here. The instrument comes with a movable bridge and 3 fixed frets with strings. If you want to re-imagine the future of classical Afghani music, then buy your favorite dream Rubab from Musichaus Prince today.