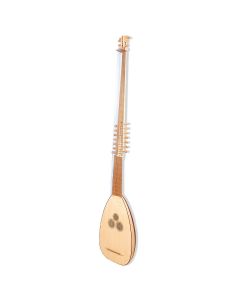 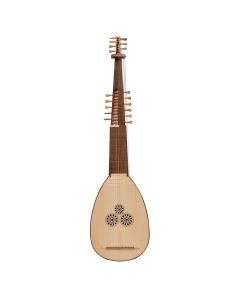 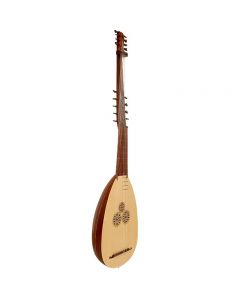 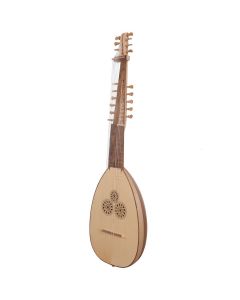 The instrument Theorbo Lute also belongs to the family of stringed lutes with plucked strings. Similar to other lute family instruments, Theorbo Lute also has a long neck and contains a pegbox. It has a curved back to produce lute-like sound that gives it a shape of a hollow box.

Theorbo has a wooden top with a neck that comes out from the sound box. The frets on the instrument are just like the frets on a guitar or a lute. The frets allow plucking strings that produces different pitches to create unique notes. However, experts reveal that a Theorbo Lute differs from a German lute with an extended length of the neck and a second pegbox.

The Theorbo lute was significantly popular during the era of Baroque music from 1600s to 1750s.

In Berlin or Germany-wide, young girls and boys of the modern era still love to play different types of Theorbo lutes that combine two ranges of strings with separate peg boxes. The history of the instrument reveals that it was produced during the late 16th century. In 1607, musicians used large bases with extended necks. The most famous historical players of Theorbo in Italy were Alessandro Piccinini and Giovanni Girolamo.

The modern players of Theorbo Lute use 14 course instruments. Even though the most popular players of Theorbo still exist in Italy, the instrument has been popular in England since the 17th century as well. In France, the first Theorbo was developed in 1637; while in Germany, the modern Theorbo is called swan-necked lutes since the 17th century. Moreover, in the 1700, Ukraine and Poland also upgraded classic turban to produce a Theorbo. A few modern composers including Lully and David Loeb also write new songs for the Theorbo.

The technique to play Theorbo Lute in Germany, Italy, and Europe is same. It is played similar to lute with left hand of musicians pressed to the fingerboard. That allows them to play chords and melodies by plucking strings on the fret board. While, the right hand is mainly used to play the bass.

Musikhaus Prince provides the ultimate collection of classic Theorbo Lute by reviving the legacy of 1900s music era. For example, you can order the best quality Theorbo bass lute made of 13 Walnut wooden staves. Solid maple wood is used to create the most beautiful neck and fingerboard. With eighth nylon frets, you can tune the strings to produce any desirable sound.

Visit our stock at https://www.musikhausprince.de and order before the stock runs out.