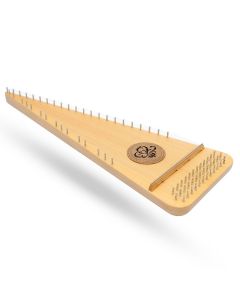 ROUND BACK BOWED PSALTARY BARITONE LACEWOOD 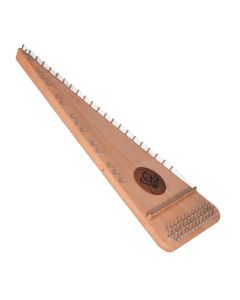 Psaltery is an ancient musical instrument with strings that was played in Greece and belongs to zither family. In ancient Greek language, the term Psaltery means to pull or pluck something. Since Psaltery contains strings to produce a sound, players can pluck strings using their fingers and not with plectrum. The ancient models of Psaltery were primarlity made from the wooden material. For producing sound, the instrument relied on natural acoustics for delivering a unique sound of its own.

The word Psaltery also appears in the King James Bible and Herbew Bible. The strings of Psaltery were constructed from metal in the olden days. The instrument was also played with the help of a plectrum; it also had a sound board under the strings. The instrument was compared to a Dulcimer and a harp in the ancient days between 12th and 15th centuries. However, psalteries differed in shapes and sizes in those time.

In Europe, psaltery lost its popularity in the 19th century with several other zither-related instruments came into existence. However, a bowl shaped psaltery also became popular in the 20th century that had a triangular shape. The end of each string could be plucked in the 20th centuy psaltery.

The modern psalteries are both triangular and trapezoidal in shape. It is much like the 12th century Middle Eastern and Greek instrument nowadays with two incurving sides. Even after its lack of popularity in the 19th century, it never lost its use in German society due to fashionable audience. Evience shows that a triple strung psaltery is also played across India, China, and Indonesia.

Musikhaus Prince Berlin, Germany-based online platform that offers spectacular collection of right-handed psaltery with 30 steel strings. The body is constructed with lacewood that produces a melodious ethereal sound. Visit our online store and take a look at our psaltery collection https://www.musikhausprince.de. The bowl-shaped instrument comes with additional accessories like a psaltery bow, tuning tool, and additional strings. All the strings are properly place.